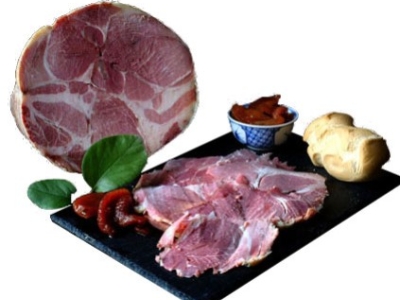 The cooked pork shoulder of San Secondo is a typical Italian artisan cured meat from the province of Parma that has very ancient origins.
Already, in the Middle Ages it was known and appreciated as evidenced by a parchment drawn up in San Secondo in 1170 and a chronicle of 1184.
This delicacy of the palate is obtained from the front quarter of the pig, a cut of meat that includes both the pork shoulder and the neck.
And thanks to the skilful touch of the hands of the norcini artisans it turns into a very delicious (even if little known) salami.
The choice to also use the coppa is due to the fact that the pork shoulder alone would be too lean and after cooking the salami would be very dry.
The neck, on the other hand, being fatter, gives the product the right softness.

The front quarter of the pig after having been deprived of the so-called "shovel" (the shoulder blade of the pig, editor's note), which holds the two types of meat together, is trimmed, salted and tied by hand.
Subsequently, it is subjected to a short maturation, which gives the final product its particular flavor without the addition of teas and aromas.
It is then cooked in water and wine with the addition of natural spices.
At the end of cooking, the shoulders are cooled and vacuum-packed to be then stored at about 4 ° C.

The cooked pork shoulder of San Secondo is remembered with a personal recipe of the great Italian composer Giuseppe Verdi, in a letter to Opprandino Arrivabene dated 27 April 1872.

“Dear Arrivabene, I will not become a feudal lord of the Rocca di San Secondo, but I can very well send you a shoulder that comes from that locality.

In fact, I already sent it to you this morning by rail.

Although the season is a little advanced, I hope you will find it good, but you have to eat it right away, before the heat arrives.

Do you know how she is cooked?

Before putting it on the fire, you need to remove the salt, that is, leave it for a couple of hours in warm water.

It must simmer for six hours, then you will let it cool in her broth.

This salami can be eaten cold as an appetizer or, to enhance its aroma and flavor, it can be served as a main course by simmering it for a couple of hours in water and wine.
It goes perfectly with Emilian fried cake or polenta.
And it is even better if accompanied by a good wine, for example, a Fortana or a Lambrusco.

I hope you enjoyed the journey to discover this particular and rare product of the culinary tradition of Emilia Romagna.

I look forward to seeing you at the next post!