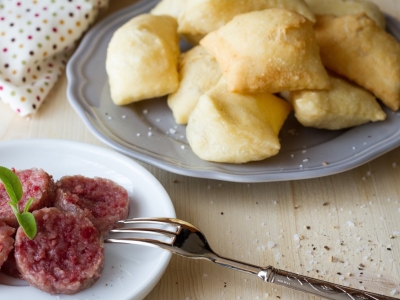 If like me you have a passion for cooking, you will always be looking for tasty recipes to cook to test your cooking skills and then to serve to your guests, during one of your dinners or lunches, in order to amaze them with always new and delicious dishes.

Today, I propose you the recipe for the fried dumpling.

You may have heard this food called differently between the various Emilian cities. This dish is called fried pie in Parma, fried dumplings in Modena and Reggio Emilia, fried bread in other areas and it is easy to hear still different and very local names in towns and provinces. This is because it is a very old traditional dish.

A quick and easy recipe that comes from the tradition of popular Parmesan cuisine, in Emilia Romagna.

In the past this dish was considered a dish that was both rich and poor at the same time.

Rich because it was made with white flour and lard. Poor because it replaced the bread which took longer to process.

How to prepare fried dumplings:

Dissolve the brewer's yeast in a glass of warm milk and add a pinch of baking soda.

Then mix everything well until a light foam forms on the surface of the mixture.

At this point, in the planetary mixer or on the pastry board, pour the flour by sifting it, the salt, the mixture of brewer's yeast and bicarbonate, the rest of the milk and start kneading.

Knead everything for a few minutes and then cover the resulting dough and let it rise for about an hour.

Subsequently, roll out the dough until it reaches a thickness of half a centimeter.

Then cut it into diamonds to fry in hot melted lard in a large pan.

Wait until our dough rhombuses are golden on both sides to drain them and place them on absorbent paper to absorb the grease.

Then, serve the fried dumplings at the table combining it with cold cuts and / or cheeses.

Remember that fried dumplings go well with foods with a strong flavor.

Less with the more delicate ones such as, for example, Culatello from Zibello PDO or Parma Ham PDO.

As for the wines, my advice is to combine them with a Monteroma Bio - Emilia's Malvasia IGT or a Lambrusco dell’Emilia PGI Rosé - Fino a sera.

That's all for today.

I hope I have been an inspiration to you.

I look forward to see you in next post!