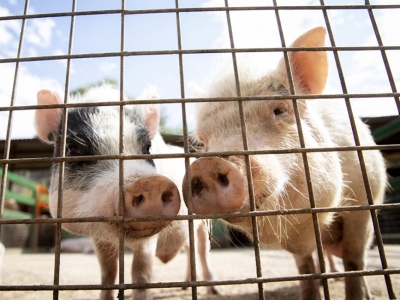 From the local black pig to the “Large White” Yorkshire breed

For several centuries the hams and other cured meats of the Parma area have been produced using the meat of the local black pig. This breed, called "Iberian", was widespread in Spain, in some areas of France and in both northern and southern Italy.

It was a small semi-wild pig, dark like its wild boar cousins, quite high off the ground and with rather long legs.

It moved a lot and went to look for food by itself in the oak woods.

As the geographer Strabone explains, these woods were large and were located in a vast area between the Via Emilia and the river Po.

This area was subject to frequent flooding at the time because the rivers had no banks and were not regimented as they are today.

Small curiosity: in the past the oak woods were not measured by surface area but by pigs. That is, by the number of pigs that the forest could feed.

The black pig took two years to reach the weight suitable for slaughtering and processing into cured meats.

At this point it happened that Charles III of Bourbon, successor of Maria Luigia of Austria at the helm of the Duchy of Parma decided, on the advice of his agronomists, to introduce English pigs of the "Large White" breed into the territory.

Initially, the two breeds were crossed but in the end it was decided to replace the local black pig with the English one in the farms since it guaranteed larger legs for the production of hams.

Since this type of pig is stationary, it is much bigger and grows much faster.

For this reason, it is ready to be slaughtered and transformed into cured meats after only one year of breeding.

But what happened to the local black pig?

It survived only in the Upper Apennines where it continued to make its life in the wild in the woods.

And it is there that in the 1990s, thanks to a recovery project, it was reintroduced into the breeding and production of cured meats.

Small curiosity: with the introduction of the "Large White" and then of other subsequent breeds of pigs, peasant families were forced to change their diet.

While before, with the beaten black pig lard the peasants could enrich their soups by bringing a certain nutritional balance to their poor dish thanks to the contribution of meat proteins, this could not be done with the "Large White" lard since it is mushy, bitter and disgusting.

So this element of the recipe was replaced by the tomato which brought some color to the vegetable soup.

We can safely say that the reasons for production prevailed over the food ones of the poor peasants.

I hope you enjoyed my short post dedicated to the history of pork in the Parma area.

I look forward to seeing you in the next post.