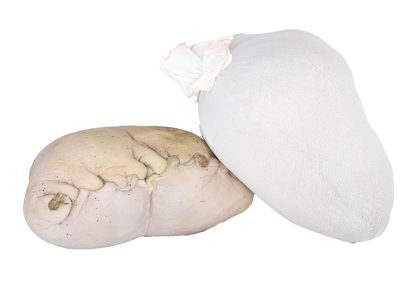 The Vescovo is a very particular and rare Emilian salami that is produced only in Colorno, in the province of Parma.

Legend has it that the citizens of this city suffered from the fact that the neighboring villages all had a symbolic salami to represent them.

Over time, this form of envy, caused by the lack of an iconic product to contrast with those of nearby towns, resulted in a real inferiority complex.

Until one of their fellow citizens, a skilled butcher, had the idea of creating something sublime.

Thus was born the Vescovo.

It is a cured meat obtained from the front leg of the pig (the shank, editor's note) which is deprived of the bone, salted and left to rest for a few days.

Then the shank is trimmed to equalize both edges of the rind in order to facilitate its sewing which is done with thin twine.

This operation takes place starting from the underside immediately after filling the front leg of the pig with an excellent mixture of cotechino.

Once the sewing operation is complete, the Vescovo undergoes a short drying treatment and is covered with a fabric "sock" that is used to prevent it from breaking during cooking.

This salami can be kept hanging for a maximum of 30-40 days in order to fully enjoy its flavor and is particularly suitable to be eaten in the cold season.

HOW TO COOK… THE VESCOVO

With a Vescovo, whose weight is about 1.6 kg, four portions can be obtained.

First you have to put it to boil, over low heat, for five hours in a pot with plenty of unsalted water in which two carrots, an onion, a celery and a potato must be added.
Once cooked, the Vescovo must be deprived of the protective "sock" and served on a hot serving dish and cut on the table.

As a side dish you can choose to enjoy it with mashed potatoes, sauerkraut, cooked zabaglione, beans or lentils.

As for the wines, the Vescovo can be paired with a sparkling Lambrusco, a Gutturnio or a Bonarda or other red wine that favors digestion by washing away the fat.

But you can also think of more daring combinations such as champagne or a Franciacorta, a Durello or a Trento DOC.

I hope you enjoyed this journey to discover this local salami and I look forward to seeing you at the next post!