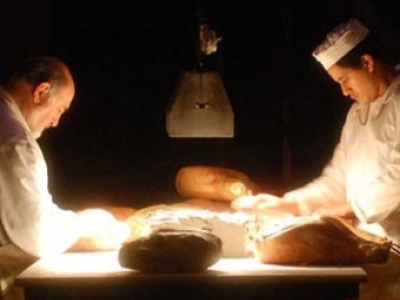 The day of the pig

THE DAY OF THE PIG
My memories of my grandfather butcher

The rainy and autumn days take me back to the distant times of my childhood.

When, as a child, I participated in the days of the pig with my grandfather and my dad.

You must know, in fact, that both were butchers by profession. In the Parma dialect we say "masén", a very well known and respected Parmesan dialect term, because only the best were able to season the cured meats well, in particular the salami, which was the most difficult to keep intact.

If a draft of air hit the line of salami too hard, internal holes could form, which would compromise its perfect maturation.

But let's get back to our story.

THE DAY OF THE PIG

At dawn my grandfather and my dad left to go to the house of the family who had called them to kill the pig and make meat, sausages and cured meats.

Nothing was discarded, every part, even the most miserable, was used, whether cooked and mixed with other parts, whether as an ingredient or as minced meat.

And when the house was that of one of our neighbors, the day of the pig became a real community celebration.

Big pots boiled in the courtyard while we children ran around the tables where the adults worked the meat according to ancient traditions among known perfumes.

The day passed between boiling the residual parts of the pig from which the "ciccioli" (typical Emilian food based on pork lard) came out, which were often eaten in the following days, or the "cicciolata", a typical salami of the territory of Parma of which Giovannino Guareschi, the creator of the famous literary and cinematographic character Don Camillo, was so greedy to the point that he dedicated a story published in 1954 in his collection of humorous stories entitled "Corrierino delle famiglia - Courrier of the family".

To produce the "cicciolata", the pig's head was first cooked for hours together with vegetables and aromatic herbs.

Once cooked, its meat was minced and pork lard, salt, pepper and bay leaf were added. Then everything had to be cooked a little longer to mix the mixture well.

Subsequently, the product obtained from that last cooking was wrapped in linen sheets of the same type as those used for the production of Parmigiano Reggiano and crushed with a wooden press in order to release the excess fat and give it the typical square shape that makes the "cicciolata" similar to a “block of granite”, even if its texture is soft.

Finally, it was left to rest for a whole day before being able to taste it.

Among other things, thanks to this process, this tasty salami, the result of the poor parts of the pig, could be kept in a cool place for five months and then eaten diced as an appetizer or sliced into medium thickness in a sandwich. . Another way to eat it was to lay thin slices of "cicciolata" on the hot polenta so as to make them almost melt.

From the most valuable parts, however, the most famous typical Emilian cured meats came out such as hams, culatelli, coppa and bacon.

In the evening, after so much effort, a community dinner was held where people toasted the success of the cured meats put to season.

And it was also a party when they finally tasted the cold cuts.

With each slice the memory went to the day of the pig-making and together with the taste they also remembered the perfumes, smells and smiles.

I hope you enjoyed this time travel. I look forward to seeing you at the next post to discover traditions and curiosities about the typical products of Emilia Romagna.